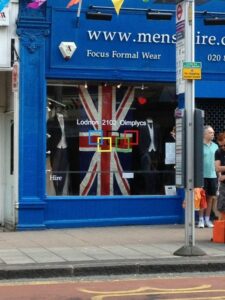 It seems the theme for Summer 2012 revolves around breaking through records. From the record-breaking temperatures here across the U.S., to the world-record performances across the Pond, people are taking notice.

However, some Americans and global Olympic watchers alike may not be as aware of the attempt to break from the record-setting handcuffs that have been placed on brands, athletes, and Olympics patrons by the London Organizing Committee of the Olympic Games.

As countries and countrymen across the globe have prepared themselves for the irreplaceable two-week span, the LOCOG will be keeping a close eye.

This year, the LOCOG has put into place a form of “Brand Police.” These “Police” are currently patrolling the shops and streets of London to try to prevent and punish any attempt at Guerilla marketing tactics by storeowners, athletes, and/or patrons. But seriously, Brand Police? It may seem justified, due to the recent value of the Olympics brand that Brand Finance has placed at $47.6 billion dollars. Coincidentally, worth more than all of its major sponsors—Coca-Cola, Acer, ATOS, Dow Chemical, General Electric, McDonalds, Omega, Panasonic, Proctor & Gamble, Samsung and Visa—combined. Ideally, what brand wouldn’t want a chance to take home a piece of that brand-exposure gold? END_OF_DOCUMENT_TOKEN_TO_BE_REPLACED

G/L’s Griffen: A man of renaissance and reincarnation

G/L’s Griffen: A man of renaissance and reincarnation

“I have a long history of working with my hands,” says Marcus Griffen, Web Designer and Programmer at St. Louis ad agency Geile/Leon Marketing Communications since August of 2011.

Just spend a few minutes with the soft-spoken, lanky 30-year-old, and you’ll quickly discover that his skill set is far more comprehensive than just being “handy.”

Born and raised in Edwardsville, Illinois, Marcus spent his childhood like a lot of kids do, working with his hands and trying to figure out how stuff works. His relentless curiosity and talent led to work as a mechanic, and later, a fabricator for an industrial automation facility.

He attended college at SIU-Edwardsville, and then grad school at SIU-Carbondale as a philosophy major, but that was short-lived. Marcus headed back to Edwardsville to pursue a degree in graphic design. While there, he took several classes in sculpture, which for Marcus became much more than just a required course. END_OF_DOCUMENT_TOKEN_TO_BE_REPLACED

Submit your information below, and we'll get back to you within 24 hours. we look forward to connecting. https://geileon.com/gls-griffen-a-man-of-renaissance-and-reincarnation/