Find Your Why: Inspired Company, Inspired Growth and Company Culture

Find Your Why: Inspired Company, Inspired Growth and Company Culture

If you have a LinkedIn account, you’ve probably seen a version of the encounter below show up in your feed: 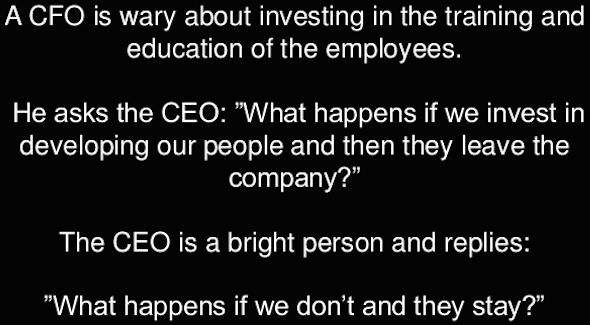 It’s a fairly simple premise: if you invest time and resources in your employees, it will pay dividends. Failure to do so leads to unmotivated individuals who may not be in a position to further advance their skills. And in turn, the company itself, being only as strong as its employees, can’t grow.

But what does being an inspired company mean? And how does a positive company culture lead to growth and innovation? And can it make work fun, or at the very least, rewarding?

We’ve had the opportunity to work closely with HubSpot, an inbound marketing software company. We’ve learned quite a bit with regards to digital marketing, content marketing and business development in the time we’ve spent working with their team and learning the ins-and-outs of the platform. It’s definitely been rewarding.

In a recent article, HubSpot co-founder and CEO Brian Halligan discussed his approach to hiring and building a particular kind of culture.

“As the years passed, Halligan and co-founder Dharmesh Shah put more thought into fostering a positive company culture that Halligan said would attract the kinds of employees they wanted, while repelling those they didn’t.”

The article also talks about their annual Inbound conference and how, despite their claim that they lose money on the event, it’s still worth the cost. That’s because it can convince people to use the HubSpot platform. It can also be a Launchpad to attract top job candidates and maintain a position as the leader in inbound marketing.

Another line that stood out:

“Now, the nearly 900 employees of HubSpot, which are largely in the millennial generation, feel a sense of ownership in the company because of its commitment to transparency and trust.”

That’s a big selling point as the job candidate pool continues to crave more of a connection to their careers than just a simple 9-to-5 grind. It’s a massive shift from simply running to the place offering the biggest paycheck.

And it has translated into business success as well. The Inbound conference had just fewer than 3000 attendees in its first year, but three years later, they’re expecting more than 13,000 marketers to attend. And with more than $115 million in revenue for 2014, they seem to be doing okay financially. Happy customers, happy employees. Seems like a win-win.

WIN A FREE WHY BOOK

We’re always available to chat. And if you fill out the form below, you’ll be entered to win a copy of Simon Sinek’s book Start with Why: How Great Leaders Inspire Everyone to Take Action.

We conducted a webinar this past week for clients, entitled A Strategic Approach to Digital Media. We included our strategic partner, Goodway Group, in the presentation. It was a successful webinar and it got me thinking about the predictive nature of planning and buying digital media advertising.

With the tracking software and tools available today, information about consumers’ online media habits and interests, among other characteristics, are readily accessible to marketers. This information includes the best time of day to serve up digital ads, certain days of the week that the consumer is more likely to be online, frequency of which customer needs to be exposed to ad before taking action and even more.

To target prospects, Goodway Group uses a real-time bidding model that serves advertising based on existing consumer data as well as online habits. Instead of buying digital inventory beforehand from media partners with the hopes of reaching the right target audience, Goodway segments audiences and places media where the target is. There’s no guessing game, just getting your message in front of the right people. Digital advertising is then placed/served through behavior targeting, contextual targeting, search retargeting, and more.

In the big scheme of things, I can’t think of a campaign we are working on that DOESN’T have the need for a digital advertising component; the challenge is we can sometimes back ourselves into thinking of digital as only an extension of a campaign. The hell with extension, putting digital first in planning is the key to making digital media advertising a reality in your next integrated marketing communications campaign.

The Impact of Digital Media Advertising

We are seeing digital media advertising everywhere. Consider these facts from the Advertising Age Marketing Fact Pack 2015. Digital advertising was the fastest growing ad medium in 2014 with 18.4% growth. People spend more time on the Internet than watching TV (273 minutes per day for TV vs. 346 minutes for internet). It’s no coincidence, heh?

We partnered with Goodway Group and held our webinar to display our commitment to digital media. Are you interested in learning more about what we do, or what digital media advertising can do? Download your own copy of our Webinar Presentation!