Writing Style Guide: 10 AP Style Tips You May Not Know

Writing Style Guide: 10 AP Style Tips You May Not Know

The AP Stylebook is a writing style guide used when writing for news media outlets. Most people who are familiar with AP Style know the common rules such as which months are abbreviated, how datelines are used and when to spell out numbers. However, AP Style covers a large amount of less known rules to follow. Knowing the style well and using it appropriately will positively impact credibility and utilization of media submissions. Here are 10 underrated tips that will improve your AP style writing:

Example: The American Society for the Prevention of Cruelty to Animals is cracking down on dog fighting with their recent campaign. The ASPCA has created a social campaign with the tag #GetTough to teach people about dog fighting and how to stop it.

Hint: This is a game of numbers.
Recently, AP Style announced it is acceptable to use over in reference to numbers due to common use, but the preference is more than to be used with greater numerical value, and over to reference spatial elements.

Example: In 2014, unboxing videos grew more than 55 percent from the previous year. In the recent Samsung unboxing advertisement, the actor swings over buildings and cars to show the camera quality of the phone.

Hint: Nope. Never. Nada.
Trademarks and other symbols should not be used when writing in AP Style. Removing these symbols makes it easier for reporters to use your press releases.

Example: The phrase “Band-Aid” is a trademarked for the adhesive bandage, owned by Johnson & Johnson and is at risk for losing the trademark due to generalization.

Hint: Before is better.
Only capitalize a title used before a person’s name.

Example: DIY Engineer Jason Bell created a human catapult to launch people off of a bridge.

Hint: Relationships versus time.
Use because when describing a specific cause/effect relationship. Since is acceptable in casual senses in regards to a sequence of events, but that may get confusing, we recommend only using since for time elements.

Example: Toyota is looking for new ways to fuel cars with hydrogen because it is the most abundant element in the universe. Since launching a short video about hydrogen fuel, Toyota has earned many supporters and skeptics.

6. Commas in a sequence

Hint: Leave it out.
The Oxford Comma is commonly misused when writing in AP Style. When writing a list, the comma is NOT included after the conjunction in a series UNLESS it is an integral part of the sequence also includes a conjunction.

Hint: Far describes a length.
Farther is a physical distance. Further is an extension of time or degree

Example: Dozens of people are taking a leap off of the second tallest residential building in the world, farther than 1,000 feet in the air.

Hint: Magazines don’t have rights.
To be entitled is to have a right. A movie, book, magazine, etc. is titled.

Example: One of Netflix’s newest series titled “Daredevil” had approximately 4.4 million views of at least one episode in the first 11 days after its release.

Hint: And none for Gretchen Weiners.
The proper AP Style use is toward, backward, upward, forward, downward, etc. without an “s”.

Example: Moving forward, brands can buy ads from both Google and Twitter together.

Hint: It’s “that” much more important.
That and which can be used in reference to inanimate objects or animals without names. That gets used when it is important to the meaning of the sentence. Use which where the pronoun isn’t necessary (and use commas).

Example: The 90-year-old tortoise that lost two of her legs could still beat the hare with her new wheels.

The AP Style guidelines change frequently; every point is re-evaluated every year for relevance. See more about the process behind the AP Stylebook in this video.

Follow AP Stylebook on Twitter to see constant updates of rules you should know and tweets with information on how to write about current events. Here are a few recent examples: 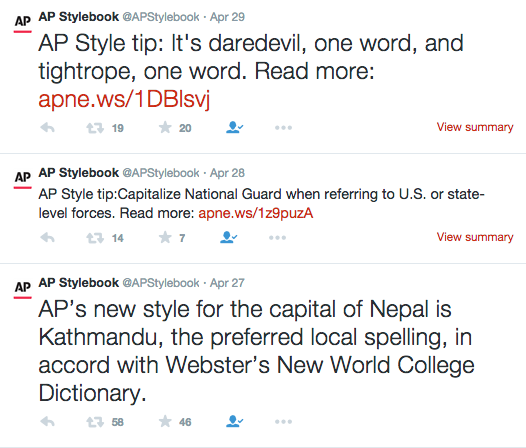 Want to talk more about writing for media? Fill out the form below or email us at [email protected] and we will lend our time to discuss your writing and media needs.