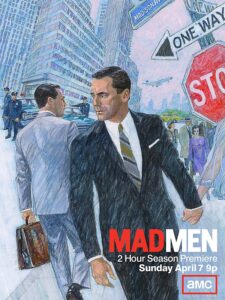 It’s fair to say that, as an industry, we can’t get enough Mad Men. And what is particularly interesting and inspiring, for me, is the show’s authenticity. Creator and Executive Producer Matthew Weiner’s attention to detail is all there, from costume — to set design — to storyline.

Even the promotional artwork for the series’ upcoming sixth season was meticulously thought out. So much so that after some of the original drafts weren’t cutting it, Weiner’s team sought out the artist whose stylized illustrations they were trying to replicate. Brian Sanders, at 75 years old, is still actively creating artwork and was able to put brush to paper and match Weiner’s vision. Clues about what the artwork foreshadows in the upcoming season, however, is left up to the viewer’s imagination.

Though most things are cyclical, the show’s popularity is inspiring more than just artwork. For modern clothing with a vintage design you can visit Banana Republic and peruse their Mad Men Collection, which is made available for the second year in a row. Maybe some Mad Men inspired furniture will help to spruce up your loft. Lamps or alarm clocks from the 60’s are readily available on eBay and, if in good working order, can go for a high dollar. The series is even influencing our happy hours! AMC’s Mad Men Cocktail Guide is helping “The Manhattan” and other drinks make a comeback thanks to ingredients and instructions for recreating the popular beverages from decades ago.

No matter how far you take your obsession and preparations for the upcoming season, be sure to set your DVR for the 2-hour premiere this Sunday, April 7th at 8PM(CT). Feel free to share what inspires you when it comes to everything Sterling Cooper Draper Price.