Trending from G/L: Parallel Parking made easy and the flying car of tomorrow

Trending from G/L: Parallel Parking made easy and the flying car of tomorrow

When we envision the future, there are certain things that seem to always come to mind. Teleportation. Time travel. Virtual-reality video games (maybe that’s just me so I can finally be good at playing soccer).

A big part of that futuristic vision is in the realm of transportation. Planes are different. Mass transit is different. Oh, and cars can fly. Have to have that one.

One thing many people will hope to see in the near future is parallel parking becoming easy. Not everyone can be raised in Chicago and be accustomed to street parking as well as yours truly, so this is something that causes problems for plenty of people.

So SmartCar in Portugal found an awesome way to tap into that frustration while showcasing their product and earning some much-deserved buzz. The company created normal-sized cars that contract in order to show the flexibility of driving one of their main vehicles. It’s a fantastic concept and we can see the facial expressions of those who see the exhibit as it’s happening. The campaign is probably more effective in Europe, where road space is so limited compared to the United States, but it would be interesting to see if something similar could work stateside.

But when we think of the future, that idea of the flying car is one that’s instilled into most kids’ imagination at a very young age. It’s something that we’ve imagined for so long. Unfortunately, it’s appeared to be nothing more of a fantasy in the short-term.

Terrafugia is trying to change that.

TF-X™ is Terrafugia’s vision for the future of personal transportation. A four-seat, plug-in hybrid electric flying car with fly-by-wire vertical takeoff and landing (VTOL) capabilities, TF-X™ is designed to bring personal aviation to the world. The design will make use of the high power density and reliability of modern electric motors in combination with parallel power and control system architectures to achieve a higher level of safety than modern automobiles. TF-X™ will provide true door-to-door transportation combined with the freedom of vertical takeoff and landing — creating a new dimension of personal mobility. 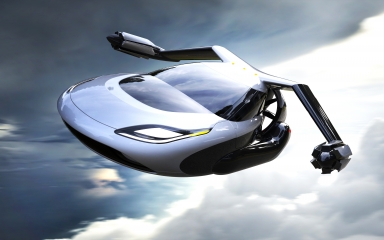 Before I get too carried away, there are certainly some obstacles to overcome. First, will it actually work as advertised? It’s going to take the better part of a decade before it will be ready for mass production. That’s a whole lot of time for something to go wrong that could potentially cause a massive delay.

The other major factor is aviation regulations. With the current debate on drone technology, there are already major questions about safety and security. It goes without saying this concept is much larger than a drone and the Federal Aviation Administration will likely have some questions before the product is rolled out for good.

Have any thoughts? Let us know and we’ll keep you posted as we move closer to the day when this technology is hopefully a reality.