The Lake and Stars Campaign Takes Things Too Far…

The Lake and Stars Campaign Takes Things Too Far… 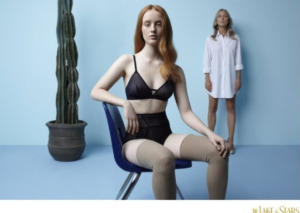 Call me a prude, but I’m really disgusted by the Lake And Stars lingerie ad campaign featuring a mom and daughter in sexually provocative poses…together!

The Lake and Stars Fall/winter lingerie campaign broke this Fall and is getting some negative press, for good reason. Obviously appealing to a younger audience, it saddens me that they have stooped to a new low and demeaned  the mother-daughter relationship by putting them in these sexually provocative photos. I love the quote from the owner of Lake and Stars, Maayan Zilberman, as it relates to the negative feedback they are receiving from the campaign, “We’re surprised that people are reacting with such violently negative connotations such as incest, given that we were only making light of a healthy, beautiful relationship between two women…” Here’s a news flash Ms. Zilberman, it’s not just two women—it is a mother and her daughter. Do the right thing here and listen to consumers. Pull the ads and admit you went over the line.

While I’m all for the element of surprise and “stopping power” in advertising, I think as advertisers we have a responsibility to not compromise moral values of society for the sake of selling product. There is much beauty to celebrate in the relationship between a mother and her daughter, unfortunately this campaign exposes none of that. It’s really not a novel idea at all—exposing women as sexual objects to sell more product. It’s been done. This company just took it to a whole new level of distaste.

Our industry is so much better than this, and for the most part, there is a lot of really good advertising being done these days. Creative, impactful, campaigns that stir conversation, emotion, entertain, etc…. Unfortunately this ain’t one of them!