If At First You Don’t Succeed…

If At First You Don’t Succeed… 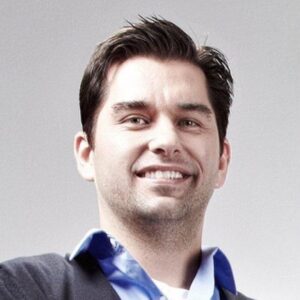 Looking back on his life experiences, Associate Creative Director (ACD) and recently named Principal, Adam Arriola credits the times when things didn’t quite go as planned, for making him who he is today. What led Adam to a career in advertising? “Failure. I was injured playing baseball for St. Louis University and didn’t find architecture school a good fit shortly after that.” So, how do you jump from baseball and architecture—to advertising? “I found myself at Miami University in the Dean of Fine Arts’ office in fall of 1999. Humbled and seeking some direction, I took the dean’s advice and enrolled in the graphic design curriculum.” For the next three years, Adam spent his time at Miami digging into a field that he’s grown to love and bouncing from bar-to-bar in uptown Oxford, OH.

Persistence, ambition and hard work led Arriola’s search for an opportunity to make his work mean something in the professional world. “I was first exposed to G/L in August 2006. I was an inexperienced 25-year-old art director who thought he knew what he was doing,” he remembers. As an AD at another agency, Adam was seeking a new challenge, with a big vision. “And…with absolutely no one to take care of but myself, I was willing to do anything…which at the time meant quitting my safe and secure daily gig to pursue an independent venture.” During his time working on his own, Adam tapped into his entrepreneurial spirit, and that is a quality which has served him well in the ad world. So needless to say, when Adam’s résumé came across our own Dave Geile’s desk, he took notice and was eager to talk to him about his creative work.

“Meeting with Dave and G/L felt like a great fit, but I accepted a position at another agency and it would be three more years before we crossed paths again. Timing is everything and the second time around, Dave made me an offer I promptly accepted.” In October 2009, Adam was hired as Interactive Art Director and promoted to ACD about two years later. “Working at G/L has provided me numerous opportunities for professional growth that I never experienced at other jobs. It’s not just a job here; I feel a real sense of ownership of my work. I give all credit to Tim and Dave for fostering such an open creative environment.” And, Geile/Leon couldn’t be more excited as an agency for the latest promotion of Miranda Warren and Adam Arriola to Principals.

As a Principal and ACD, Adam works with almost every client project. He is a true problem solver, admitting that “fixing things” makes him feel good. And, his love for fixing things extends to more than just G/L projects. As a “weekend warrior,” Adam spends most Saturdays and Sundays at Home Depot and NAPA Auto Parts, picking up parts and supplies for his DIY home and car restoration projects.

As for tackling client projects, Adam claims to find creative inspiration everywhere, but there is evidence that it comes from his heart. The story begins in college, when he had to create a slab sculpture for a ceramics class. “I was certain it was going to be awesome.” And everything was going as planned, until Adam learned a lesson in meeting deadlines. With just a few days to go, he was running behind and had to abandon his original idea—piecing together a sculpture that resembled a pile of jagged metal. “I was disappointed, promptly took it home and stuck it in my closet … where it remained for the rest of the semester.” 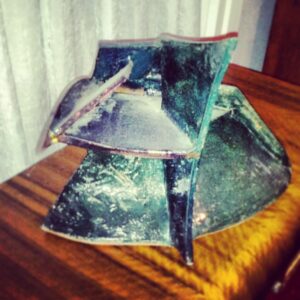 Well, if at first you don’t succeed…Adam’s mom and brother can help find the true meaning. “Cleaning out my apartment at the end of the year, I started to throw this ugly mass in the garbage when my mother began carrying on about how much she loved this hideous thing. Typical mom…but that’s not the funniest part.” He says, “I just happened to be going through a messy breakup when this ‘fine’ piece was created, and my brother quickly pounced on the opportunity to exploit my relationship woes for his own amusement…telling my mom how the distressed sculpture reflected my ‘distraught emotional state’ (not true at all). Which only made her like it more.” Twelve years later, Adam still has to see that “thing” every time he visits his mom. It’s her favorite piece, and she proudly displays it in her home. “Gotta love moms! And like any good brother, he still pokes fun at me about it to this day. I hate that stupid sculpture!”

Luckily for G/L’s clients, Adam’s days of creating emotionally distraught artwork are behind him. He found the love of his life, and they are expecting their first child. “We’re having a little girl, and the hardest part has been selecting a name. But, I think we finally have the one.”

You never know where life will take you, but the detours along the way can prove the most meaningful. Adam realized his calling and found his professional home at G/L following years of changing circumstances. It’s hard to imagine Geile/Leon without Adam’s creative vision, attention to detail and “Seinfeld” references. Clearly, he still puts his heart into everything he creates so that each project means something. And that, my friends, is “winning.”

“For the record, I’d still like to be a baseball player.”

Submit your information below, and we'll get back to you within 24 hours. we look forward to connecting. https://geileon.com/if-at-first-you-dont-succeed/